I feel like it’s been forever since I had the time to do a Nail Adventure! My nails have been pretty wretched lately, actually. Part of it was me doing some cleaning at work and dropping a sign.

Instead of letting the sign fall on the floor, I caught it.

Which broke three nails to the meat. It wasn’t pretty. I had to bandage up for a couple of days.

Now, they’re starting to grow back nicely, but for safety’s sake I’ve been keeping them short, and to let them breathe, I’ve kept them largely unpolished.

Yesterday, since I decided to do my usual writing outside instead of in my house, I decided to do a quick manicure. It’s in a pale shade (!!!!) because it gives the illusion of longer nails and it hides nicks pretty well (this would be why you see so many celebs with pale, neutral nails). So, what did I do? 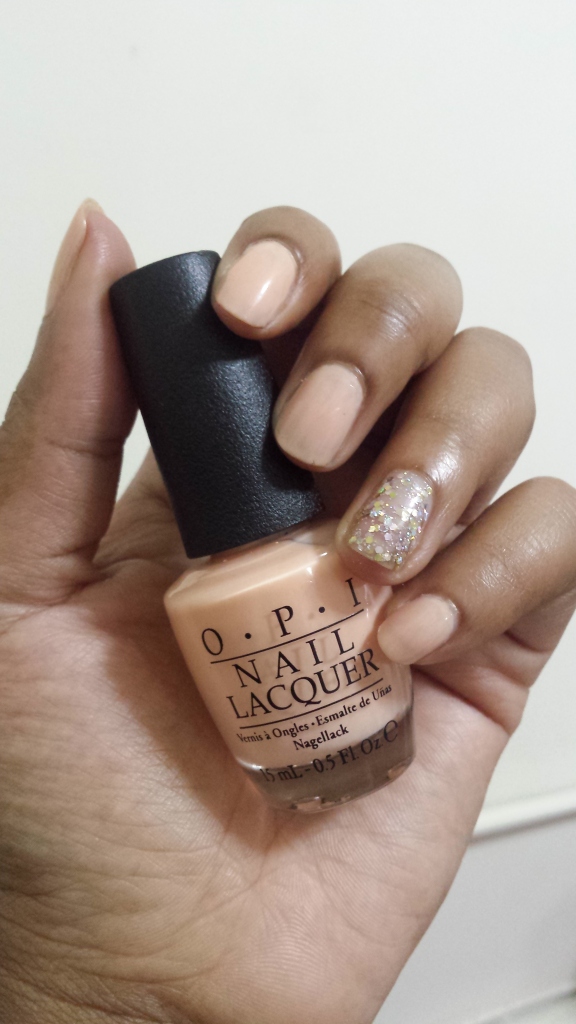 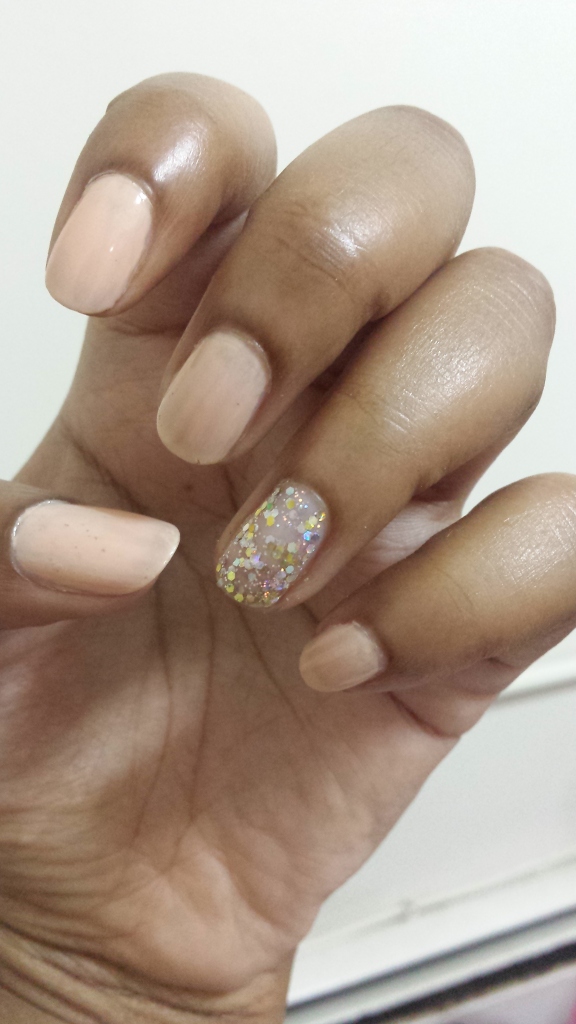 So, the pale coral is OPI’s Chillin Like A Villain and the glitter is Julep’s Paris.

You knew there had to be glitter somewhere, right? Because this is me we’re talking about. 🙂

I’d had the OPI color in my box for a while and never used it because pale and neutral, which we all know I tend to be allergic to. But I got a tan while I was out doing the AIDS walk last week (it went awesome and I was OMG TIRED but I did it!), and I noticed how lovely the color looked against my skin. So I went for it.

And yes, I can admit I like it. The simple sparkle (which is over bare nails) just gives it enough oomph for me to not feel like it’s boring. Very classic glam.

I would caution that this color is also pretty sheer. Had I more time I would have done a third coat to get it as opaque as I prefer (that’s two coats above.

I know, I promised fashion week coverage. Sorry! I’m still sorting through all 400 pics, so have a manicure look instead.

For the most part, last week’s manis consisted of all of the nail decals I could find. As much moving, snapping pictures, changing, and running out the door I was doing, regular polish just wasn’t as feasible as I’d hoped.

This week, however, I am back to the day job and my usual grind. Why not break out the regular polish?

Or at least, regular for me. 🙂

Now, most of the time my fingers and toes do not match in color or design. Last week, when my nails weren’t bare, they had simple one or two toned looks (reverse mani stickers and such). My toes, however, were decked out with rhinestones in flower shapes and polka dots.

For last Saturday’s fashion show, I decided to change to a pale cream shade and add some gold glitter. I couldn’t decide what to wear, and I’d knocked the rhinestones off of one toe, so I figured it would be a good neutral bet.

I love it so much, I wanted it on my hands too. Here it is: 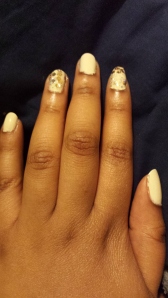 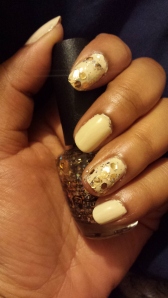 These are colors you’ve seen me do before. I have no idea what the name of the cream color is there (it’s by Julep, but the sticker fell off!) and the gold glitter is OPI’s I Reached My Gold. My outfits were elaborate enough last week that I am actually looking forward to being a bit understated this week.

Normally you’d be seeing a Nails of Literature post today.

That’s coming up tomorrow, and if you love my stories, then you’ll love this one!

In the meantime, have another nail look today: 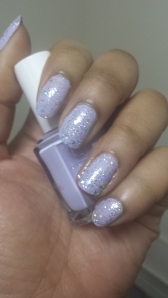 Color is Essie’s Lilacism with OPI’s In True Stefani Style layered over the top.

Off to get myself ready for work. See you tomorrow!

I went to a meeting for work, and I did my nails up all fancy for the occasion.

I picked up Push and Shove from OPI’s Gwen Stefani Collection. Its this really cool silver that, when used with the Lay Down That Base base coat, turns into this beautiful high chrome silver with mirror reflection. I got the set of two: 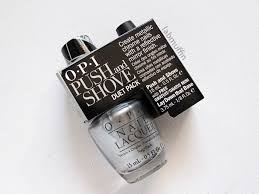 I used Essie’s Licorice as the black accents, and added a fancy bow charm and rhinestones. The result? 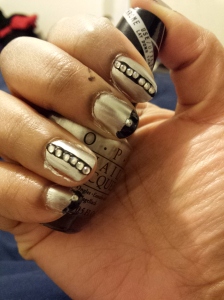 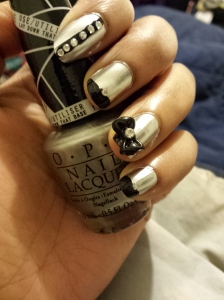 This is a look I absolutely loved, but it doesn’t last long. In order to get the chrome look, you can’t use top coat (adding top coat will take it to just a regular silver color.) Also, the charm kind of worked my nerves a bit; I was petrified that I would knock it off of my finger! But since that wasn’t a day that I worked with my hands, it was all good.

I should note that this mani took me a while to get done (about midnight). It’s bad when your obsession keeps you up at night.

Totally worth it, though. 😀